Hello again Readers. I have just completed another book on my Kindle Fire, a collection of ghost stories written by Joseph Sheridan Le Fanu.  I have my own very personal reasons to be interested in this writer. First of all he was Irish as were indeed my forebears. Perhaps even more importantly my late father shared a very similar name and I am sure he read these stories before me. 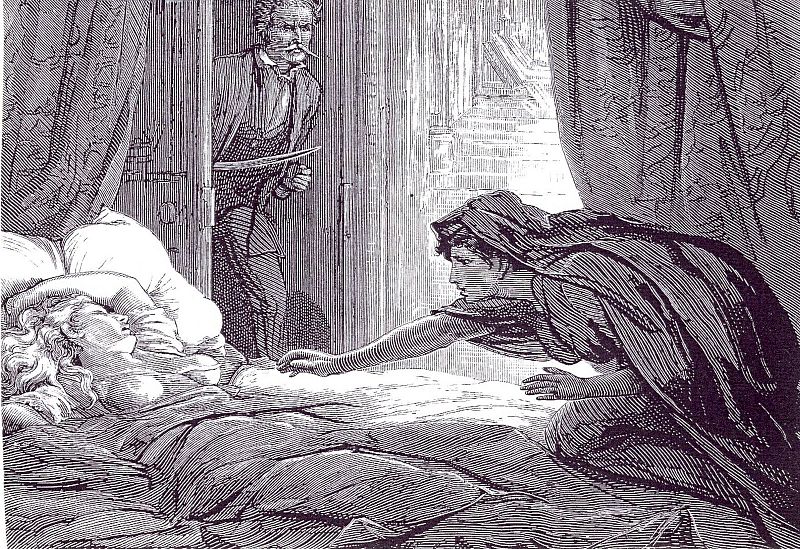 The short story or novella I have just completed is titled CARMILLA. I had never previously heard of it and at first I failed to realise that I was becoming engrossed in a vampire story though there are some clues in the first chapter!  Not any old vampire mind, this is a lesbian vampire! The story is set in the Austrian province of Styria which borders Hungary. An old castle or schloss is home to a nineteen year old girl and her father, the mother long dead . Nearby is General Spieldorf’s schloss and a ruined village, plus a roofless old church containing mouldering  tombs of the proud family of Karnstein . Quite early in the story the girl relates a strange and scary dream which took place when she was just six years old. She dreamed that she heard a noise, woke and found a very pretty face of a young lady looking back at her……..This is a story well-told and I was introduced to some words that were completely new to me – oupire and revenants!.

Having enjoyed the story I wondered where the inspiration came from? Had the writer been inspired by the works of others? Who wrote the very first vampire story and when?  Had Le Fanu travelled to places where similar stories were told? With the wonders of modern technology and the internet at my fingertips I soon had my answer.

I quickly found an excellent document written by Matthew Gibson of University of Central Lancashire(ISSN 1932-9598) see hyperlink at base..

In this paper Matthew Gibson provides some very good evidence suggesting where the inspiration came from. Unlike Bram Stoker’s Dracula, we do not have lists of works consulted yet there are parallels with other works which might indicate he read or knew about them. For example  Dom Augustin Calmet’s Treatise on Vampires and Revenants,  translated into English in 1850 as The Phantom World. A scene at the end of Carmilla where the vampire is enticed into a church looks like it was taken wholesale from one of Calmet’s accounts . Another source may be William  Sabine Baring-Gould’s The Book of Were-wolves (1863). This work drew attention to Wagener’s  earlier researches into Erszebet Bathory, the Hungarian Countess who killed her female servants  in order to rejuvenate herself with their blood.

Le Fanu’s depiction of the area around the Schloss seems to  indicate a very clear understanding of what the region of Styria was like at the time, with its gigantic forests, ruined castles and  decay. He also  uses names that betray a knowledge of its region, Baron Vordenburg’, for example: Vordernberg was in fact the Styrian residence of the Archduke John, the region’s most illustrious citizen. How could Le Fanu have created this setting without any prior knowledge, provided either by friends descriptions and travelogues or guides of Austria that would have been available at the time? Matthew Gibson puts forward a particular book to be another possible source of inspiration- Captain Basil  Hall’s Schloss Hainfeld; or a Winter in Lower Styria (London and Edinburgh, 1836), a romanticized memoir of Hall’s stay, with his wife and young children, at the abode of Countess Purgstall during the winter of 1833-4. The Countess in the 1836 book does have some remarkable similarities to Le Fanu’s Camilla. Countess Purgall was formerly Miss Jane Anne Cranstoun in the 1836 story. If you translate Cranstoun into German, the native language of Austria, you get Karnstein, a family name used by Le Fanu in Camilla.

According to Wikipedia Le Fanu’s  story was to greatly influence Bram Stoker in the writing of Dracula. It also inspired several films, including Hammer’s The Vampire Lovers (1970), Roger Vadim‘s Blood and Roses (1960), Danish director Carl Theodor Dreyer‘s Vampyr (1932) and Harry Kümel’s Daughters of Darkness in 1971.

As an aspiring writer I am fascinated by the writing process and how such illustrious writers such as  Le Fanu and Stoker researched the all important background detail to their works. Its very clear both were inspired by previous stories, both  using elements of other works to create their own.( Looks to me that Stoker used the same method to dispose of a vampire as Le Fanu!)  My own works will be historically based. I really enjoy researching to find those all important background details . It is clear from reading Le Fanu that setting the scene and introducing your main characters needs to be carefully done but there is nothing wrong with borrowing from the works of others. I also like the way he plays with words – Cranstoun to Karnstein!

Until next time reader, I will follow Bram Stoker’s example and leave a list of works I have consulted in this blog..Oh yes nearly forgot, now the really good news! You can download both Bram Stokers Dracula and Le Fanu’s Camilla totally free of charge to your Kindles or E-readers. I found Camilla in an anthology called In a Glass Darkly Book 3 of 3 on Amazon where you can also get your free copy of Dracula. Of great interest is the method used to kill a vampire in both books – and its NOT what you have seen in the movies! I wont spoil your enjoyment by revealing all here, you can find it for yourselves!

Oh yes, what are Oupires and Revenants ? Oupire is another term for vampire and …. A revenant is a visible ghost or animated corpse that was believed to return from the grave to terrorize the living!

Further Reading? Vampyre by John Polidori (1819)  (credited by some as the creator of the vampire genre of fantasy fiction.)

28 August 1814 – 7 February 1873) was an Irish writer of Gothic tales and mystery novels. He was the leading ghost-story writer of the nineteenth century and was central to the development of the genre in the Victorian era. Three of his best known works are Uncle Silas, Carmilla and The House by the Churchyard.

July 2015...... I published my first book on Amazon - "Savilles Spinnney". On April 1st 2015 I published my second book - "Arsenic Sally". Christmas Day 2015 I published my third book " Murder Mystery and Mayhem on the Railways 1830-1899. That's 3 books in roughly 18 months. I enjoy researching and see no reason to stop writing. There will be many many more books and while I would love to be taken in by a publisher I am content to make my books available via Amazon. Keep checking my blogs for updates about my upcoming projects......
View all posts by bakersfieldlad →
This entry was posted in cemetery, churchyard, dead, dead bodies, dream, graves, gravestones, Historical crime, Ideas for writer, meaning of dreams, Vampire, Writing, writing ideas, writing process and tagged bodies, burial, cemetery, crime research, dead body, graves, gravestone, synopsis writing, Writing. Bookmark the permalink.

a history junkie rambles on...

Some signs of life in the Dark Peak

YA paranormal/fantasy and New Adult author

The writer gives life to a story, the reader keeps it alive.

The Art and Craft of Blogging

Free your imagination and express your original ideas